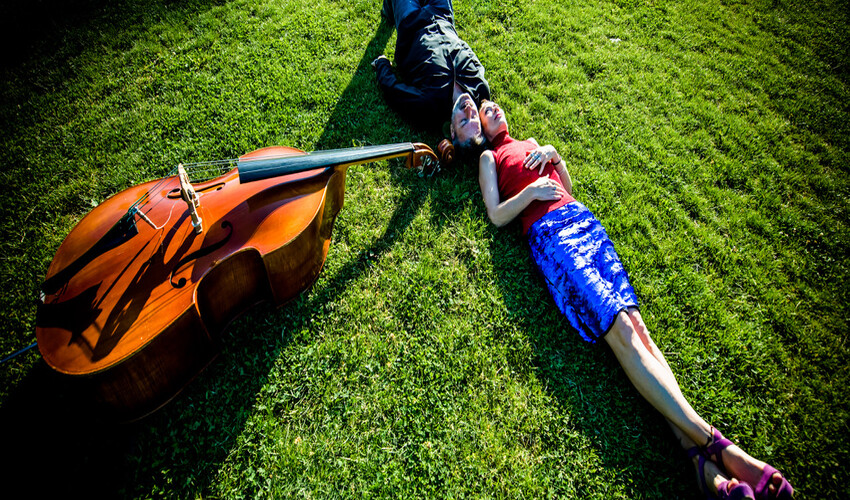 This duo cannot leave anyone indifferent. Its musical direction is radical. Love it or hate it. I chose my camp: I am definitely subjugated by the voice of Sascha Ley and the one, which passes through the strings and the body of the double bass, Laurent Payfert. The music is, as the subject, uncompromising. This album "It’s Alright To Be Everywhere" (you can easily guess the political positioning that hides under this title) is filled with cries of heart, cries of rage, cries of love. The voice and the bass join as much as they tear each other apart, repel each other as much as they intermingle, answer each other as much as they anticipate.

There is something very sensual about Sascha’s singing, and sometimes animal too. She sings, hisses, whispers, hiccups and he scratches, glides, pinches. The pieces are short, intense, as pictorial as they are abstract, as poetic as they are raw. At a few moments, towards the end, Jean Pascal Boffo’s guitar invites itself as if to prepare the arrival of Murat Öztürk’s soothing piano on a last piece, „Departure“, of a beauty and elegance unheard of. It is like a veil that rises and reveals a clear sky. We are floating after this intense trip, we are well, we breathe and say we have listened to a great record. Jacques Prouvost (BE) 12/19

An exciting and lovely album This 17 - tracks – record by Sascha Ley & Laurent Payfert, characterized by the unbeatable combination of vocals and bass the duo, has been created with guest musicians Jean Pascal Boffo (g, elec) and Murat Öztürk (p). The music lies on the border between freely improvised jazz with contemporary musical elements and more traditional vocal/bass constellations that we have heard from Sheila Jordan, in collaboration with Hervie Schwartz, Cameron Brown or Arild Andersen. However the most interesting thing on the record is when they take it a bit "out" and move into the freely improvising landscape. The music is entirely created by both the musicians.  And all the way through the 17 tracks this is extremely exciting. Not least because of the rich and good sound on the record where Pascal Boffo has controlled the levers.  Ley's vocals are great to listen to. And although she is an actor, I do not think the voice becomes theatrical or acted, which is often the case with artists who combine vocal performance with theater and film. Occasionally her voice is mixed in several layers over the bass, which creates a nice variation in the expression, and with the full bass sound of a well listening Payfert, this becomes an original and fine record.Payfert is a very skilled and creative bass player with a superb technique and many ingenious ways to use the bass, completely mastering the instrument.  Together they have created an exciting and lovely album, suitable for small gatherings. And I would be more than happy to sit down for a night or two to hear them at a little club in a basement somewhere in Central Europe. You should definitely put this exciting and varied music at the top of your list.

Once again Sascha offered the audience a monument of ingenuity and originality.

… delirium, a delightful delirium that involves the audience into an infinite, devestating, yet emotionally charged waltz. A journey that only Sascha can offer us. Her voice is unique. She paves the way for imaginary and illustrated worlds and universes which enable the listener to build and deconstruct all kinds of unprecedented scenes in his mind. Laurent Payfert is astonishing at the double bass, he is a man of sound, a ferryman of sound experiences. An massive musical program that took the listeners to the limits of psychedelism.” Zeitung  vum Lëtzebeurger Vollek 11/19 Michel Schroeder

It’s Alright To Be Everywhere, which has been released by JazzHausMusik turns out to be quite nice. Ley has a definite style on her own developed as singer, actress, poet and composer, while Payfert has a typical wonderful European style and sound. Inspired by those wonderful Sheila Jordan duet albums, but takes a different direction. One Man’s Jazz (CA) 11/19

An extraordinary duo - Recommendation of the week The singer, composer and music producer Sascha Ley has a unique voice and style of interpretation that combines jazz improvisation, folk and contemporary music. The artist, reaching for various vocal techniques, comes out victorious from each practice, as evidenced by her concerts and records warmly received throughout Europe. In 2015 the singer's fifth album "the wee hours" was released, which Sascha Ley recorded chamber-music-like in a duet with the French double bassist Laurent Payfert. The continuation of cooperation is a new album of this extraordinary duo, which will be released on October 16 by JazzHaus Musik. On the album "It's Alright To Be Everywhere" we will find 17 original compositions of both artists, largely based on improvisation. Spontaneous sound creations are an interesting mix of contemporary jazz and experimental music. Carsten Dahl, Longplay (PL) 10/19

The two musicians have achieved their goal, the album sounds very organic, forming a very uniform and integrated whole. Like a concept album. No hard cuts, everything flows into each other and the audience can listen to the purist soundscapes unfolding in front of them or soak the work in and take off for a personal contemplative journey. The music is a mixture of jazz compositional standards and free improvisation ... a serious exploration of the depths and shallows of life in and of itself. Martina Folscheid Télécran (L) 10/19

The new album by Sascha Ley and Laurent Payfert, It's Alright To Be Everywhere, reveals once again the experimental nature of their music. The opportunity for the public to (re) discover their talent for improvisation, characteristic feature of their music, sometimes impalpable, but still always explosive in live concerts. A duo that does not leave indifferent. Kévin Kroczek D’Land (LU)10/19

Dreamlike soundscapes.  Sascha Ley and Laurent Payfert offer something extraordinary at Völklinger Hütten-Jazz. A truly eccentric duo performed on Friday night with a combination of vocals and double bass. Singer Sascha Ley and Laurent Payfert showed this difficult art at high level. The promised enchantment with dreamlike and suggestive soundscapes reaches the enthusiastic jazz audience and is rewarded with much applause. Saarbrücker Zeitung(D) 08/18

Ley uses lyrics, scat, instrumental and experimental ways as well as a theatrical approach to her singing. The bass, skilled at percussive play, puts pizzicato on top of a loop of the bow... An exceptional and unprecedented duo. I cannot think of a duo to compare with. In their way of using the voice like an instrument and the percussive usage of the bass together with the layering of loops as an add-on, the duo from Luxembourg's jazz scene is unique. Jazz Perspectives (JPN) 08/17

Sascha Ley is a complete artist, actress of theatre, cinema, author of plays (..) and also singer. She is accompanied by her faithful double bass player Laurent Payfert. The duo offers us a set of vocal jazz, virtuoso, esoteric. A well-honed duo, knowing each other by heart. Sascha vocalizes, sings, creates sounds, noises and samples. The double bass follows, accompanies, or plays ahead. Osmosis. The universes are varied, one passes by romantic compositions, sequences of experimental jazz, and even a blues of Led Zeppelin. A high-level vocal mastery (..) Jazz-Rhône-Alpes 08/17 (FR)

Echoes from the UK

Sascha Ley is a multiple talent: actor, director, and of course jazz vocalist. In the duo with the French bassist Laurent Payfert, she designs a fascinating modern jazz with a multifaceted alto voice. 11/16 Martin Laurentius

To see and to listen to Sascha Ley and Laurent Payfert in concert, is really something. On one side: a woman, singer, composer and actress, in short a complete artist, who shares a great pleasure with the audience to exploring her voice and bending it in every direction. On the other: a man and his other half, the double bass, which he knows by heart. From compositions extracted from their album "The Wee Hours" to covers and frenzied improvisations: you leave a concert by Sascha Ley and Laurent Payfert with balm for your soul. The audience does not want to cease their applause and eventually leaves the auditorium, entranced. Kévin Kroczek, LAND Kultur 08/16

In case you know Sascha Ley, you will know what to expect from this CD. The Saarbrücken born vocal artist from Luxembourg, who also works as an actress and composer, is – if one may say so – without parallel in Europe. Melodious, expressive and with stunning lyrics (three of which can be found on the cover). Of course she makes ample use of her voice, not only when reciting/singing the lyrics, but also in order to perform them in a moving manner; in every respect an extraordinary singer and musician. She is accompanied by the bass player Laurent Payfert and thereby connected to the entire spectrum of acoustic music this enchanting solo artist stands for. There is a lot of storytelling, acting and improvisation involved in each of these songs. Here we find music and drama combined in a unique way. 11/2015 Hans-Jürgen von Osterhausen

The Luxembourgish vocalist Sascha Ley has been trained among others in Amsterdam. She practices what she calls herself "instant composing". You might know Sascha from the ensemble Kalima with a pianist and a saxophone player (see the Jazzflits 200 review of the CD „Everything Within“). On "The Wee Hours" she presents an improvising duo with the double bassist Laurent Payfert. It is an album with a lot of improvisation and just a few songs. No standards. The "normal" songs (“Pilgrim of Happiness”, “Naam Cha Cha” and ”Ballade Bleue”) feature the vocalist who really can sing. Moving off the beaten paths even here. The remaining pieces seem improvised on the spot. As in “Aiutami”, as well as in “The Wee Hours” and “What's Up” she keeps playing with words and melody, with the sound possibilities of the mouth and throat. Sascha is accompanied by an inventive double bass. In some pieces loops serve as a basis for the improvisation. “India Callin’” delivers many opportunities for voice and bass variations by trying to contact India through a bumpy connection, including Indian rhythms and vocal sounds. Fans of Greetje Bijma will enjoy this album for sure. 08/15 Hessel Fluitman

CD tip of the month of June 2015 ! An exciting journey through jazz, instant composing and improvisation. Being only two, the duo explores the sonic possibilities of voice and bass, often onomatopoeic, with few but powerful lyrics. A kind of musical theater, that goes without pictures, but all the more creates impressive atmospheres. 06/15 Mane Stelzer

Atmospheric density and fearless tracks. A challenge to the jazz. A toxic, shattered and battered masterpiece. 06/15  Mike Dostert

A royal voice. The album reveals both a bold and adventurous jazz. Sascha 's voice and Laurent’s double bass interact and infiltrate each other until they remove all locks and enter the world of sound on rarely explored paths. 06/15 Annie Gaspard

An album full of texture and colours! 06/15 Ron Tuffel

SAMPLES of the new